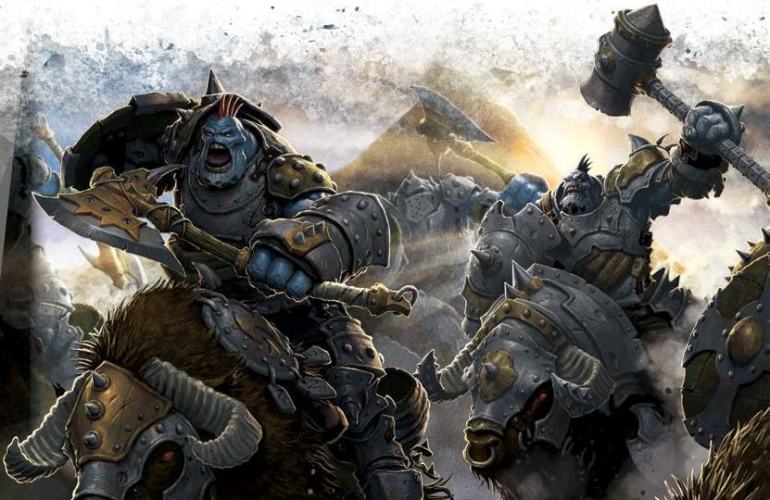 Today I’ll be walking through one of my favorite scenario lists in all of Trollbloods!  There are a few variations of this list that work well:

However, the core module — Kolgrima and two units of Long Riders — is common across all variations I’ve tried.

The primary win-condition of this list is scenario.  You have a variety of tools to help accomplish this, which we’ll go through in detail below.

Your secondary win-condition — assassination — is only really an option for the first few matches that you run this list against an opponent.  Once your opponent gains the following knowledge about your list, assassination will become much less likely:

Kolgrima’s feat, Snowblind, can be applied effectively in two differing ways.  You can feat defensively to protect your Tuffalo from gunlines.  Removing Eyeless Sight, Flight, and Pathfinder usually results in less of your opponents models being able to reach you as well.  Alternatively, you can focus on the 2″ push section of the feat to really guarantee that you are going to either win on scenario or take a commanding lead in that department.  Two max units of Long Riders slamming models out of zones coupled with a 2″ feat push means you can really bully the board around.

She’s got Freezing Mist which is most commonly used to place a cloud wall in front of your advancing Tuffalo.  Hunter’s Mark is insane in a list that runs SPD 7 cav.  Cursed Fate can be especially useful to throw on high ARM targets that your Tuffalo normally don’t want to be making impact attacks against.  Vanish prevents Kolgrima from ever really getting jammed.  Oh, and she also has Winter’s Tide — a cold damage SP10 that has crit stationary.  This is one of the scariest sprays in the game because of her innate Dark Power ability.  A boosted Winter’s Tide under Dark Power has a 46.91% chance to crit stationary a DEF 16 target and hits that target 89.51% of the time.

On top of a great feat and an amazing spell list, Kolgrima is also Fury 7.  That’s not very common for Trollblood warlocks and it helps keep your SPD 7 Tuffalo within her control.

The Bull Rush order.  Bringing ten cavalry models to the table that can slam is an incredibly potent scenario force!  Not only do the Tuffalo get to slam, but they also are able to Follow Up after slamming (move up to the distance that the slammed model was moved, directly towards the slammed model) and they receive a free attack.  The Tuffalo’s mount — which you’ll normally use to make your free attack after slamming — has crit knockdown, which is handy albeit not reliable.

One of the variations of this list adds Horthol (who grants Line Breaker).  A nifty trick you can do in that situation is to have one Tuffalo charge a higher DEF heavy (like a Warpwolf), impact attack with three dice to hit, get the crit knockdown, then use another Tuffalo to slam the knocked down model out of a zone that you otherwise would have had bad odds of connecting with.  That situation doesn’t come up often, but this can be an interesting solution to contemplate.

Tuffalo have Reposition 3″ being cavalry, so they are able move back into a zone after slamming (and knocking down) models out of it.  At DEF 12 ARM 20 (under the stone aura) with 8 boxes and tough, these models are incredibly hard to remove from a zone efficiently.

The Fell Caller Hero is an important module in a Tuffalo-heavy list as he can grant Pathfinder, +2 MAT, or stand up knocked down Tuffalo that have made their tough check on a previous turn.

What does this list NOT WANT to see across the table?

What does this list WANT to see across the table?

This list does not crack armor well — in the past I’ve paired with a Borka2 beast brick, or something like Madrak1 and two units of Champions.  Depending on your meta, you might need more tools to combat Incorporeal models outside of Edrea’s Wind Burst or the Krielstone’s Spirit Chaser ability.  If I run Madrak1 with two units of Champions as my other list, I’m sure to include the Sorcerer attachment to both units to be able to kill those pesky Wraith Engines!

Do you enjoy winning on scenario?  Do you like Trolls riding Buffalo that are especially resilient?  Do you enjoy fun?  If you answered yes to at least two of those questions, give this list a try and let me know how it does for you!

View all posts by Lance Aeby