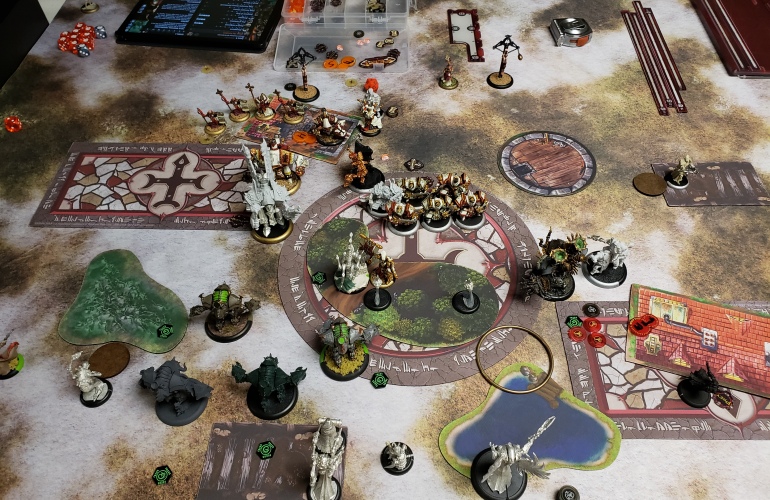 Today’s BatRep featured Dwayne vs. Caleb. This was a great game made even better as it was our first face to face interaction since Covid. I hope you all enjoy our rusty BS.

I’m going to start by apologizing for the limited number of pictures. I generally don’t take many, if any, pictures of the games I play. I’ve come to terms with that. That being said I’ll try to make up for it with description.

…We ran. You’ll see in later photos that our terrain was pretty jammed up. Forest in the center, 2 Buildings on one side. Rubble and Acid Pool on the other. The other terrain included a trench for us both, and a Water feature.

Dwayne won the initial roll and elected to go first. I chose the side without the rubble. I figured it gave me the cleanest lane to move into his side of the board since I lacked any way of granting Pathfinder to my Slayers.

Dwayne pushed all the way into my side of the board with his Errants to begin pressuring my clutch solos. The rest of his army ran up and spread to try and get around the huge forest right in the middle of the board.

His Hand of Judgement and Fire of Salvation were both to my left across from my Slayers in the only clear pathway. His Cinerators pushed right up the middle behind Hand of Silence that was sitting pretty behind his Errants preventing me from taking any souls if I were to eat into his Errants.

Choir followed the Heavy jacks as one would expect. Gade sat in a trench camping his flag, with Gravus close by hiding behind a building waiting to accept Errant souls from Hand of Silence.

This was Dwayne’s first time playing Feora4, so he unfortunately forgot to cast Road to War which would come up later in the game. He pushed Feora forward to sit behind the Cinerators. Casting Death March for cheap due to Hierophant on the Errants, and camping the rest.

Revenger ran across the field to sit behind the Heavies to allow for future support from Feora.

The photo is actually at the end of my turn 1.

The forest in the middle presented a ton of Errants in a line, so I wanted to send DJ in to take as many out as possible. To do that, first the left hand Stalker (painted) moved up to kill 3 (Down to 7 + UA and Stick boy). G4spy and crew activated, dropped a Caustic Mist for a little protection, and Pressed Forward. This got several Errants in rand of Dark Shroud from the Servitors (there were three in a line).

Denny0 had allocated DJ 2 focus, and activated to cast Witch Bond. She moved up to hide behind her main squeeze Gaspy. Hellslinger Phantom ran to hide behind the building to the right. Soul Trapper ran to my flag. Pistol Wraith ran to the left. Hermit hid in the trench. Stygius joined him.

DJ activated and charged into the Errants. He could reach 3 in melee, and killed them. I forgot to Snack so I gave Dwayne their souls. With 4 focus remaining, DJ cast Venom off of Denny0 down the front line missing my Servitors. Magic 7 made it work, and I hit all 5. Dark Shroud off of the Servitors made the Venom an effective POW 12 and I was able to crack the armor of all 5 Errants (Down to 2 + UA and Stick boy). A second Venom was able to catch all of the remaining Errants in it. With no Dark Shroud, the POW 10 spell hit all of the remaining models. It killed the 2 remaining grunts, did 1 point to the UA, and bounced off of the Stick.

Not wanting to let the UA get something in, I activated the sliver Stalker and Jumped it into the UA. Stalker killed the UA, but it took both initials to do so and was out of focus to take the Stick out.

Slayers all activated and ran into position in anticipation for the next turn. Skarre advanced into the middle of everything to prepare for Feating next turn, and cast Ritual Sacrifice on the Servitor that was in the middle of the group giving her 3 focus on her next activation.

A number of unfortunate things happened to Dwayne this turn. A few simply because of learning a new caster while also trying to break off the rust of not playing.

Hand of Silence charges DJ while full on souls. doing a fair bit of damage. Gravus moves to the center, and grants the Cinerators Desperate Pace, then Repos out of the way. Cinerators charge DJ. Three can get to him needing 6’s to hit. Two of them successfully hit, bringing DJ down to less than half health and crippling Left arm and Movement. They then use Defensive Formation to position into the middle of the board and Shield Wall to block paths to where Feora will go.

Stick boy tries to just get in the way. Gade takes a couple of shots at DJ, but engagement bonus creates misses. Hierophant does Harmonious. Choir battles Hand of Judgement and Fire of Salvation (really Menoth, you couldn’t give them shorter names?).

Feora moves over and casts Hellwrought on Hand of Judgement (irony), and Death March on the Cinerators. Not wanting to go empty, she does not cast Road to War.

Hand of Judgement is unable to get to my forward Slayer, so opts to take out the painted Stalker. He does so with no problem and one shots it. Fire of Salvation is just out of range to charge anything, so parks behind HoJ. Revenger moves forward a bit into the rubble to keep both heavies in front of it for future spell arcing.

Skarre allocates four focus out to two Slayers. Gaspy fills the Stalker. DJ only gets power up and one extra due to crippled left arm, so Denny0 allocates him 3 and upkeeps Witch Bond.

Skarre Feats spending 10 life. Effects 4 Slayers, herself, DJ, Gaspy, Denny0, Hellslinger Phantom, and remaining Stalker. She them moves into the trench and casts Dark Guidance. With the 2 focus she had left over, and the three of of the previous Ritual Sacrifice, Skarre is sitting on 1 focus.

To free up DJ, Gaspy charges Hand of Silence, and Servitors more into the Cinerators for Dark Shroud. One Servitor is able to charge and attack, doing 1 point of damage. Gaspy takes out Hand of Silence in one hit and then casts Flicker to put Servitors and himself into better positions.

A Slayer charges Hand of Judgement and fails to kill it, leaving it on 2 boxes. In order to open up the lane from my other filled Slayer to get to Fire of Salvation, I need to use the Stalker to finish HoJ and do a bit of damage to FoS. The Stalker was just out of range to be able to swing at Gravus instead. This is a change from my original plan to jump behind the Cinerators to take out the back line. Second Slayer charges in to finish off FoS.

Stygius moves to heal Skarre for 5 boxes. The remaining 2 Slayers move into position. One to protect Skarre’s left flank, and the other to begin moving through the forest towards Feora.

DJ walks up to get the front 3 of the Cinerator row and Snacks on all three, healing a total of 3 boxes. This triggers Vengeance on the other 3 Cinerators for next turn.

I forget to activate Hermit and Pistol Wraith.

Pass Turn. Caleb Scores own flag and opponents square zone. Dwayne is contested at the flag and fails to score.

Cinerators do little with their Vengeance attacks on an ARM 24 DJ. Needing 4’s to hit now due to Death March, 2 of them fail to hit rolling 3 and 2. The other hits for dice off 13 damage and fails to break armor.

Anastasia Ambushes the left side. Feora fills the Revenger.

Gade shoots at Hellslinger Phantom but misses both shots.

Anastasia moves up and kills the Soul Trapper on my flag.

Reveger charges painted Slayer in the opponents square zone. Skarre’s Feat is tough to crack, but even so the Revenger dos a few points of damage to the Slayer before it runs out of focus.

Feora kills a Servitor with Scorn and goes up to 4 Anger tokens. She feats catching one Slayer in the blast doing a couple points of damage, and lighting it on fire. Warders puts himself between DJ and Feora.

Denny fills DJ with 2 focus now that his arm is still repaired. Skarre fails to allocate because I am dumb and rusty.

Gaspy charges Cinerators and kills 2, while Servitors get Gravus and remaing Cinerator UA in Dark Shroud. Gaspy kills 2 Cinerators because they were unable to Shield Wall the previous turn.

Hellslinger Phantom walkes up to base the opponent’s flag, and shoots Gade off the board with the help of Gunslinger ability.

A Slayer walks up to the Cinerator UA and lays the smack down…I mean, kills them with help from Dark Shroud off of Servitors. Another Slayer kills the Repenter.

Dwayne extends his hand in defeat.

It was a very fun game to play against one of my favorite guys to play with. We both agreed, that had Dwayne been more familiar with Feora4, and cast Road to War on Turn 1, this game could have been much different.

I am getting a little more used to Gaspy4, and like what he brings to a list like this. It may not be his optimal location, but it’s not bad.

I won’t go into list theory and what to change, aside from saying that DJ and Denny0 are more of a fun addition to the list rather than a needed part of it.

View all posts by captaingramerica